– By Brad from Canada

I have a pair of Legacy Helix speakers that require 3 amplifiers per side to drive each of the following sections – Mid-Bass, Mid-Range and Treble. For the past 3 years I have been using Class D amplifiers manufactured by a well known company in audiophile circles. I enjoyed the sound of these amps, but they have proven themselves to be unreliable, way too many trips back to the manufacturer for repair, so I decided enough was enough and the hunt was on for new amps. Because I was satisfied with the sound of the amps I have been using, I started my search looking for the best of Class D amplifiers. 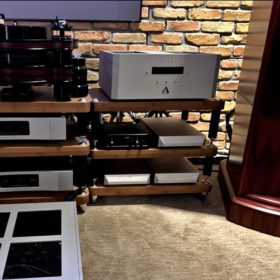 NuPrime was one product that came up through my search, and after more research on all of their products as a whole, I decided that the ST-10M would be worth taking a look at. There are some glowing reviews on the web about their ST-10 and Evolution One amps, which was nice to see, but a lot of times these reviews need to be taken with a grain of salt (too much creative writing). During my research on NuPrime, the one factor that kept coming up was performance value, no need to spend big bucks for great performance. The MSRP on the amps I have been using are almost 4X what the ST-10M’s are, so I was a little skeptical on what I was to expect performance wise. Not that I believe spending more money on anything means it’s going to be better, but for such a spread in price, how could it possibly be that good?? I contacted Aamir with Summit HiFi to discuss the ST-10M’s and his 45 day in home trial period. Aamir was very helpful with any questions I had, and assured me if I wasn’t satisfied with the product, I would receive a full refund during the trial period – so it became a no brainer, lets try them out! A week later the amps arrived, they have been burning in for three weeks now.

They sounded pretty impressive right out of the box, but have improved greatly over the last 3 weeks. It would be a huge understatement to say that I’m very impressed with their performance. The following are my observations on sound quality in no particular order: Large holographic soundstage, 3D imaging, completely black background, very neutral and highly resolving, tight defined bass, superb mid-range (vocals are awesome), rich tone, smooth and dynamic. Excellent performance from top to bottom, very musical and engaging (toe tapping goodness!) I’ve been in this hobby for approx. 30 years, and at no time have I come across the price / performance value that NuPrime offers, it really is unbelievable. These amps are the real deal, and I will be keeping them. Having said that, I am now interested to hear what the Evolution Ones would sound like???