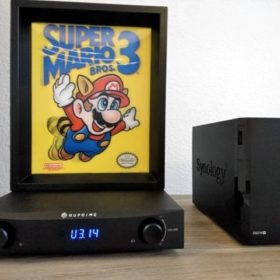 I have always loved music and it is part of my life since I am a teenager even if I am not a person that knows by heart all the artists and their albums. I like the good sound and I listen to all type of music from philharmonic to rock, acoustic, hip hop or electro. I have been to several auditorium in France where people play to you only classical music when you want to buy a hi-fi system. This does not suit me. I have grown with other types of music and I would like to have a system suitable for a large variety of musics.

I have started when I was young with my uncle’s hifi system, an Akai AA-5210 amplifier and French 3A Apogée speakers with huge 25cm speakers. It was nice until I broke a loudspeaker during a party and the amplifier volume control was starting to be damaged. I then switched to Focal Chorus 714S and a HC Yamaha amplifier. I have never really been satisfied with the sound stage but I kept it for a long time until now. I knew the amplifier was the weak part.

I have tried to search an integrated amplifier with a good compatibility with my speakers as I did not have the budget to change everything at once and it has been really difficult… I had mainly targeted 2 amplifiers which where the NAD C368 and the NAIM Unity Atom. The NAD was giving a too harsh sound with Pop Rock music and it was tiring even after a couple of minutes. The NAIM was a better match but the price is more than double of the NAD. Then I decided to read again and I discovered Nuforce, I read the story of the company and discovered the Nuprime brand from Jason. The IDA-8 became my target only on reviews because of its completeness and its sounds which is a bit warm with the class A preamp and to be frank, the price was really interesting. I was searching an amp with all the digital inputs as I do not listen CD anymore and the IDA-8 had everything build in. For the NAD I would need to add also the Bluesound module and on the NAD, with the WR-100D, I would have the same in the future.

Now I really start in the high fidelity with the IDA-8, I can watch my TV and movies using the optical cable, my computer and NAS using the USB A, the USB B for the Bluetooth with the good BTR8 and soon the WR-100D. The output sound is great, the design of the amp and super nice and you can put it everywhere with its size! The speakers became the weak part of my system. They sound a bit flat and lack the 3D scene that I could hear with the Sonus Faber Chameleon B of a friend so I am thinking to upgrade them and I feel the IDA-8 can drive really nice speakers of 3 or 4 times its price. I start to be addicted with this hobby and I think I will continue my journey with Nuprime products!