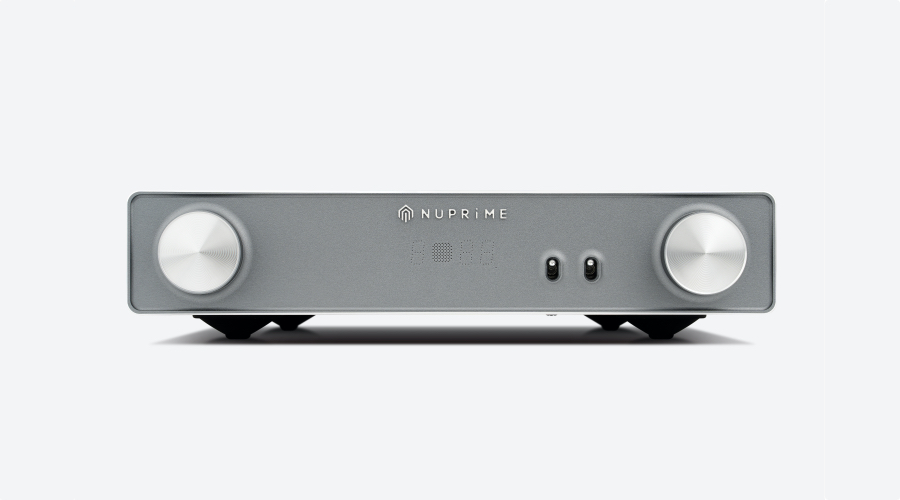 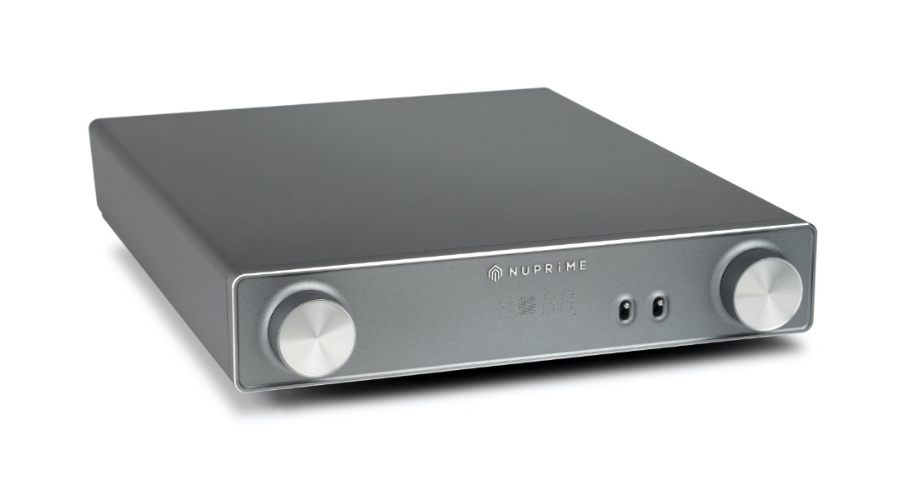 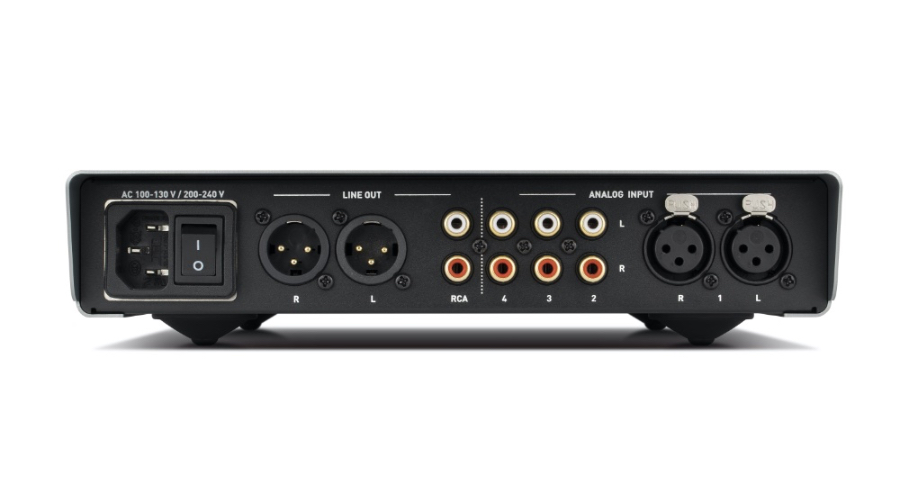 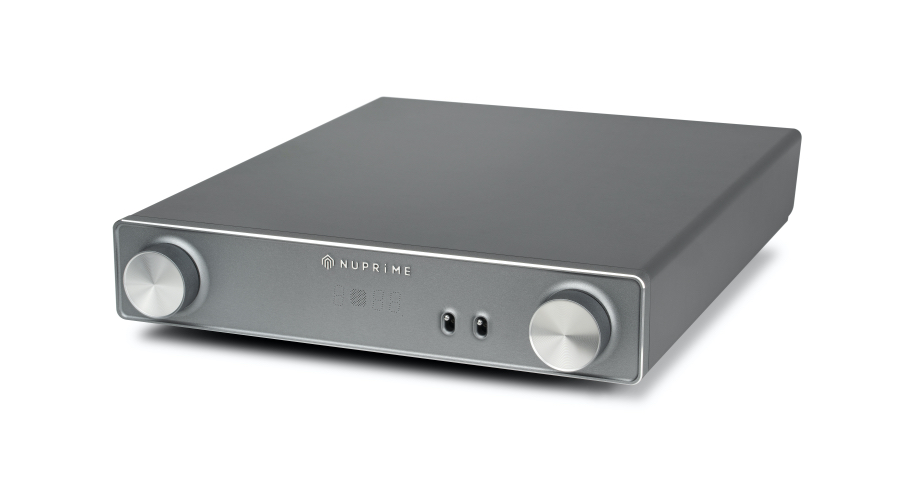 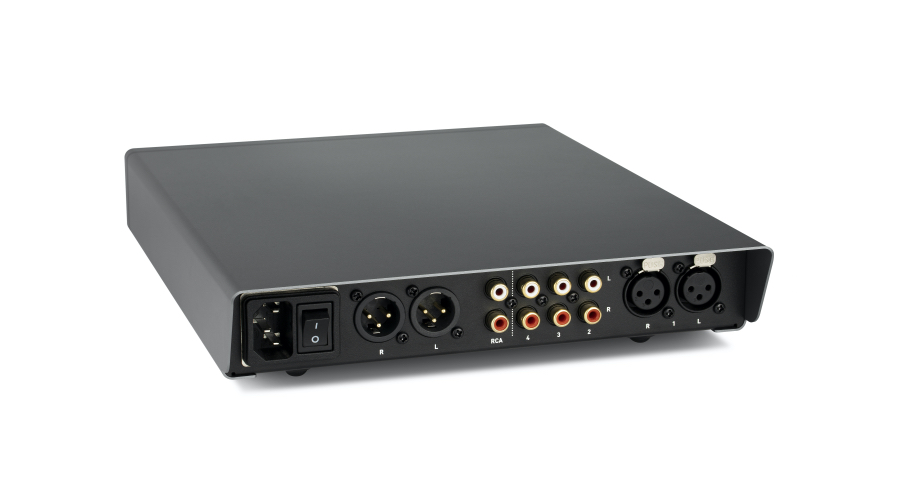 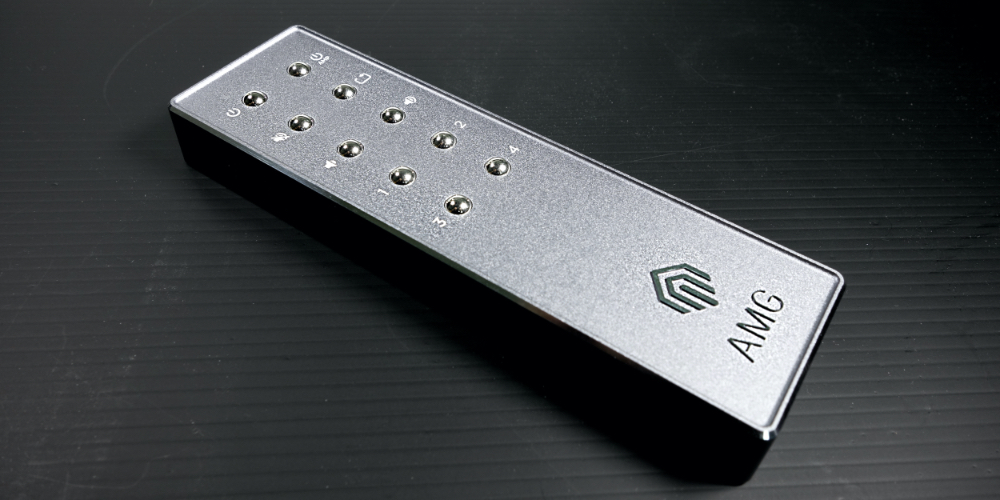 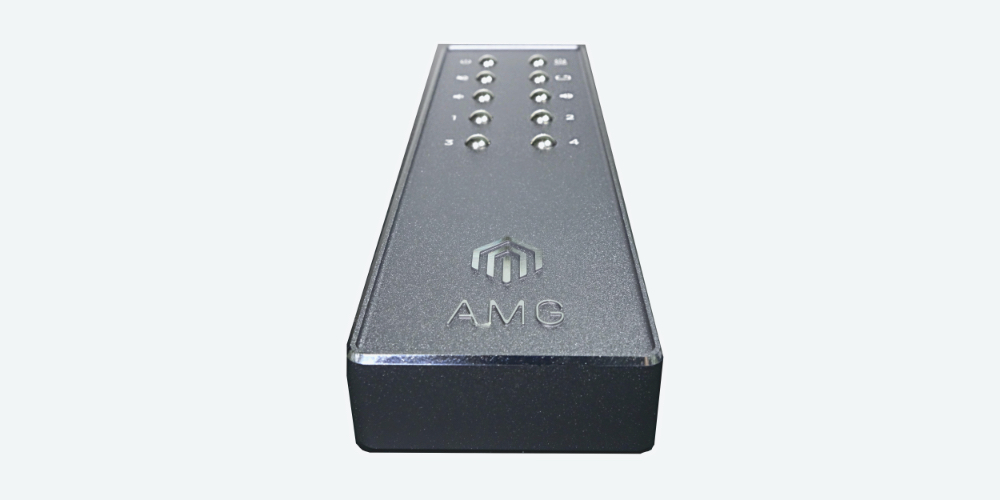 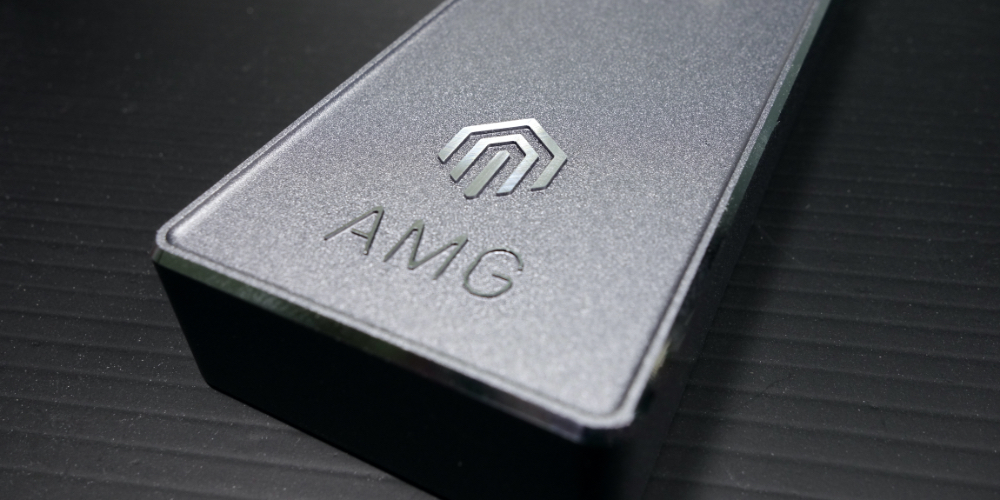 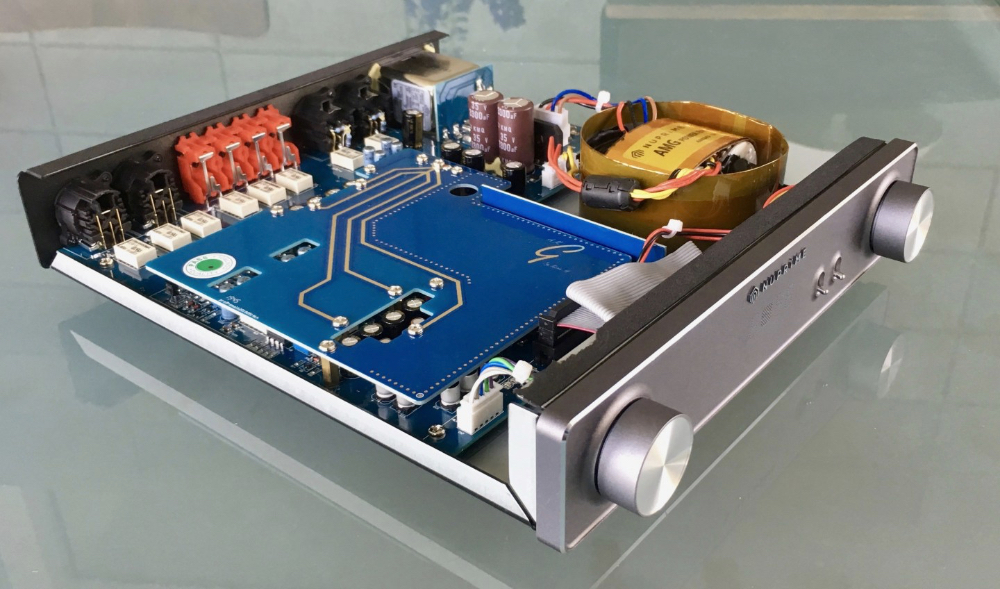 The AMG PRA went beyond being a transparent preamp with 1M Ohm input impedance and the best analog source inputs. A user-selectable 4 stage “Active Low Frequency and Harmonic Gain” control gave it distinctive characteristics to enhance the speaker performance, a world-first in preamp design.

The AMG series front panel embodies its spirit. It is milled from a 15mm harden aerospace aluminum alloy using a four-axis CNC machine with a diamond cutter through a 48 steps process. Design elements such as the 3D “floating” logo, the curved surface around the front panel switch, and diamond-cut edge bring the quality of ultra-high-end audio products to the affordable range of the AMG series.

The design goal for AMG PRA was to deliver a transparent sounding analog preamp with its distinctive characteristics. Several new design concepts were developed and used in the AMG-PRE besides 1MΩ input impedance to achieve the best analog inputs.

Users of smallish speakers would often detect a distinct drop in bass response with some audio tracks. Instead of a simple “Bass Boost” function that lifts a targeted low-frequency band, a user-selectable 4 stage “Active Low Frequency and Harmonic Gain” control compensates for the lack of bass presence. It achieves some bass extension and a more natural roll-off.

Additional features such as the 2 stage gain control and invertible phase control increase the compatibility of the AMG-PRA with other power amplifiers. 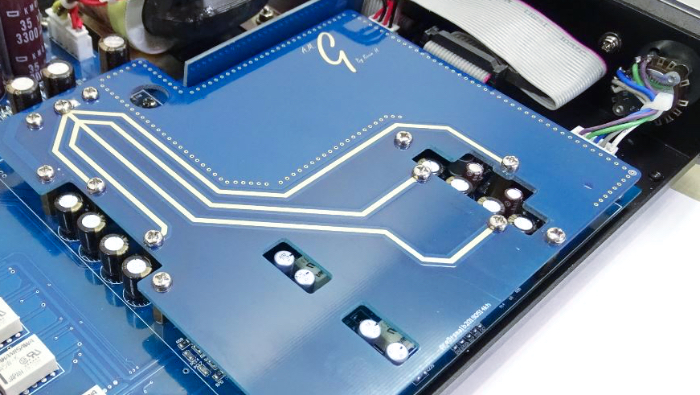 The layout of the AMG-PRA takes excellent care in isolating the sensitive audio signals from the power circuitry. The power circuitry comprising of a star topology power and ground layers is built on one board while a separate board houses the pre-amplification circuit. An isolation layer separates these two boards, which further minimizes interference. The effect is a highly transparent sound that is natural and not over etched. 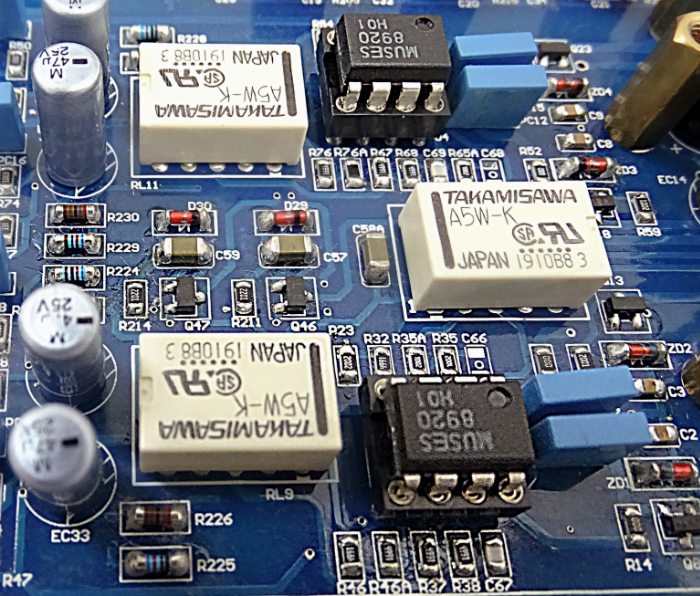 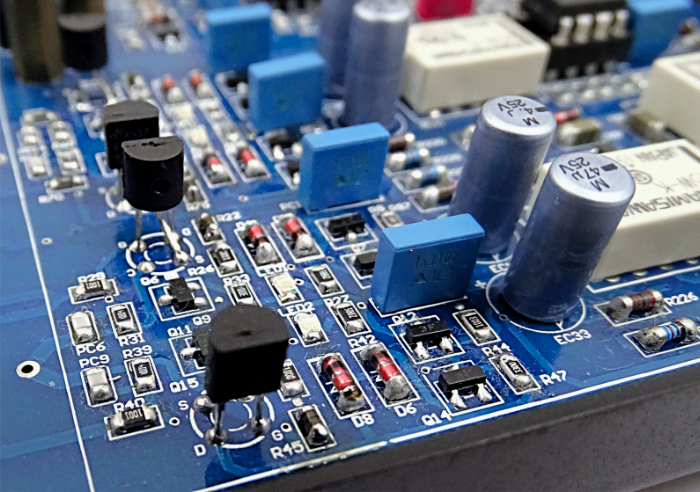 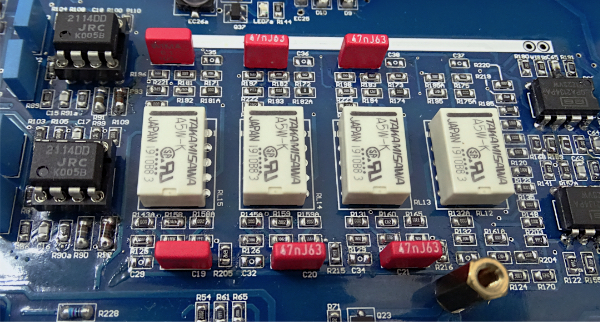 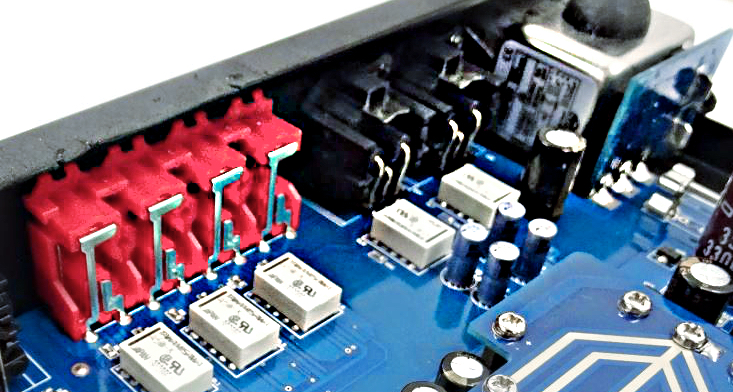 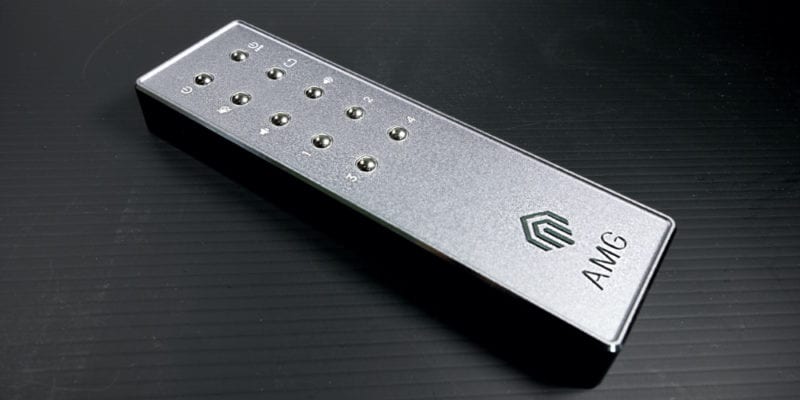 NuPrime proprietary EQ settings allow the users to customize their listening experience according to music preferences and audio equipment matching. Despite its name, Loudness settings create a presence of warmth and impact for the listener instead of louder sound.
Turn the knob to switch between Loudness Compensation 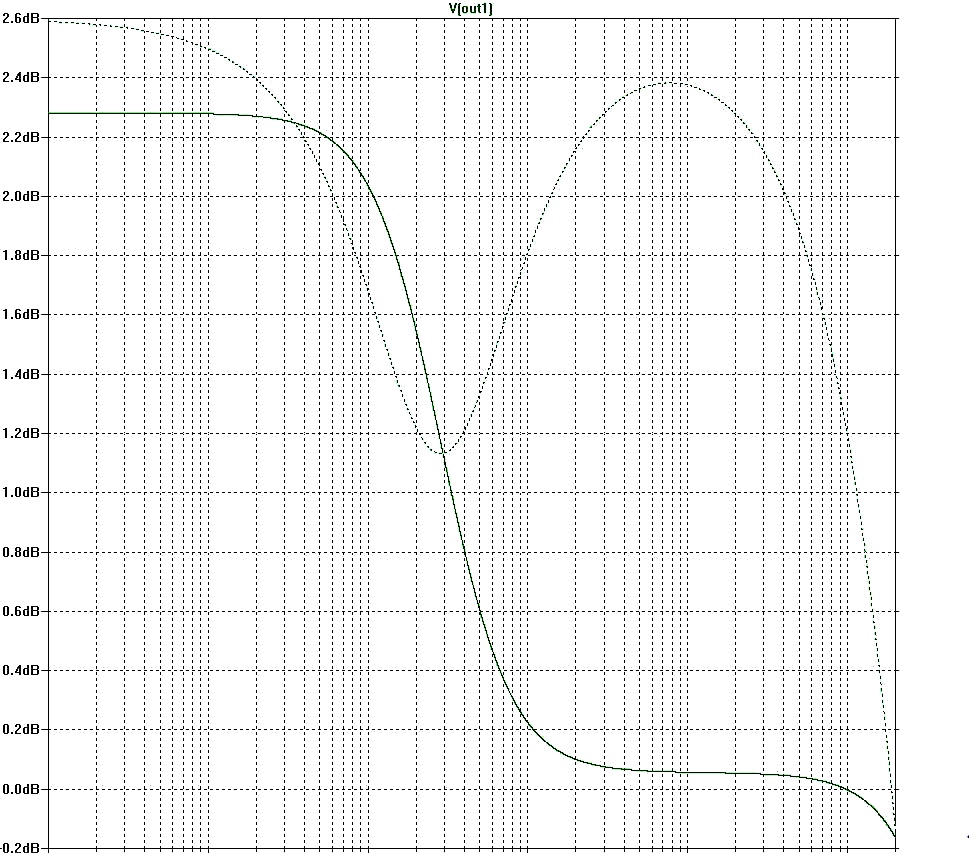 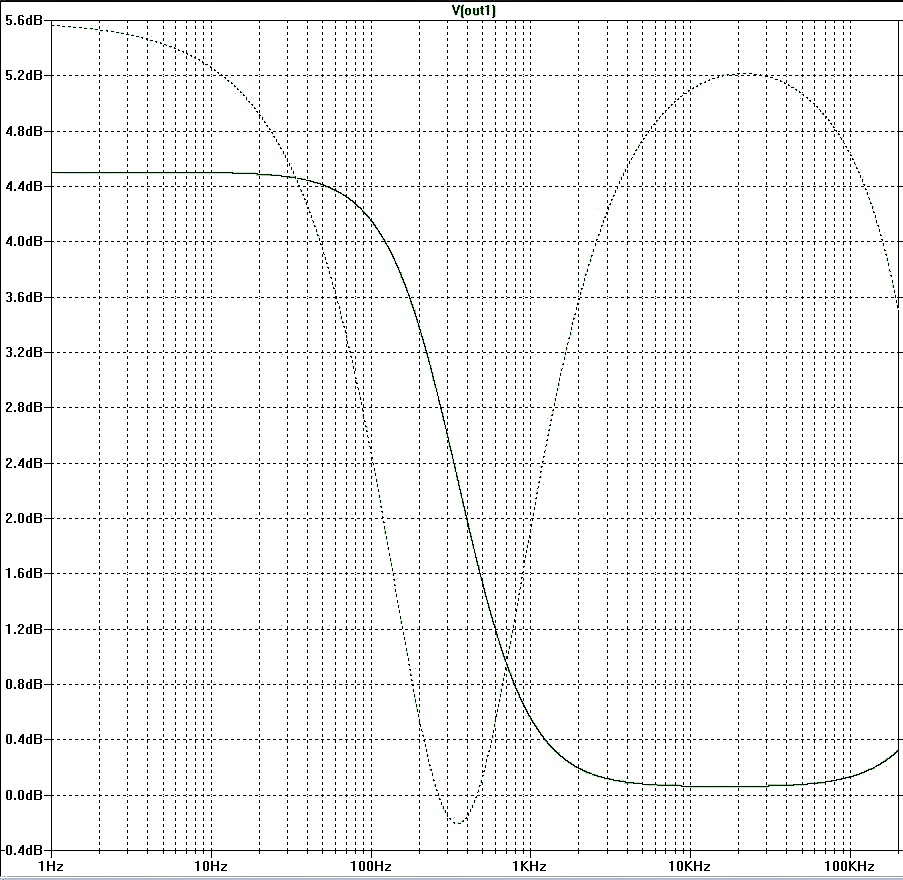 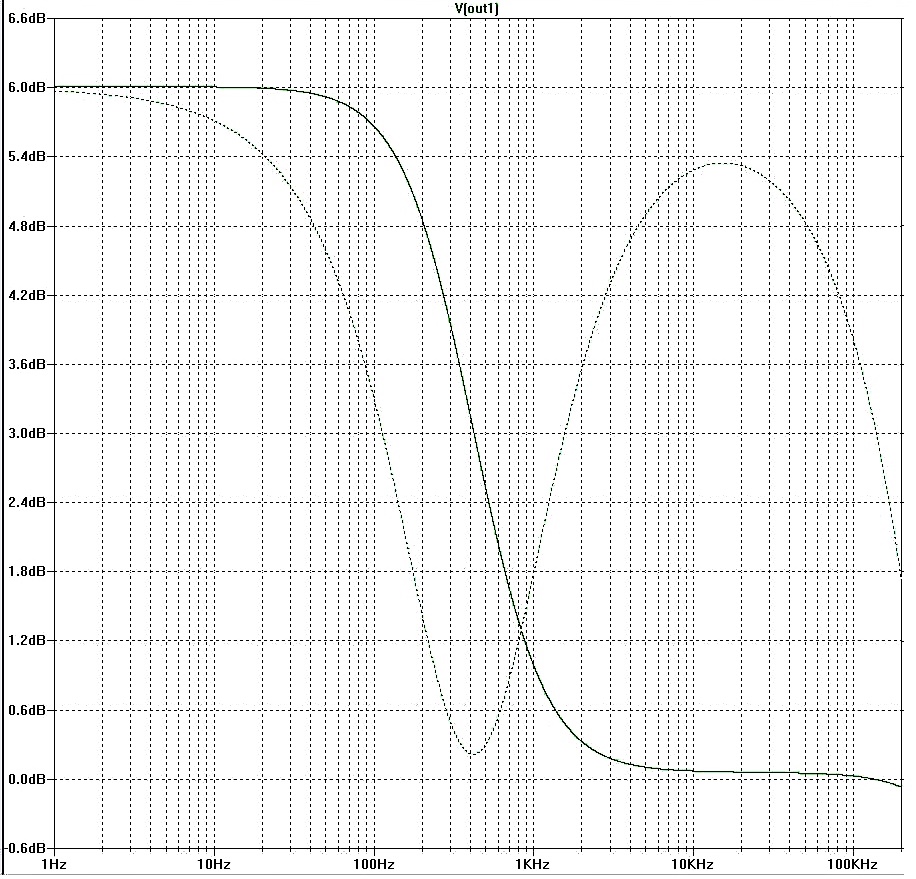 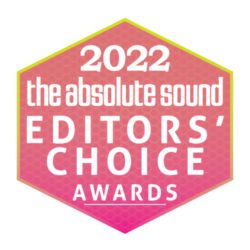 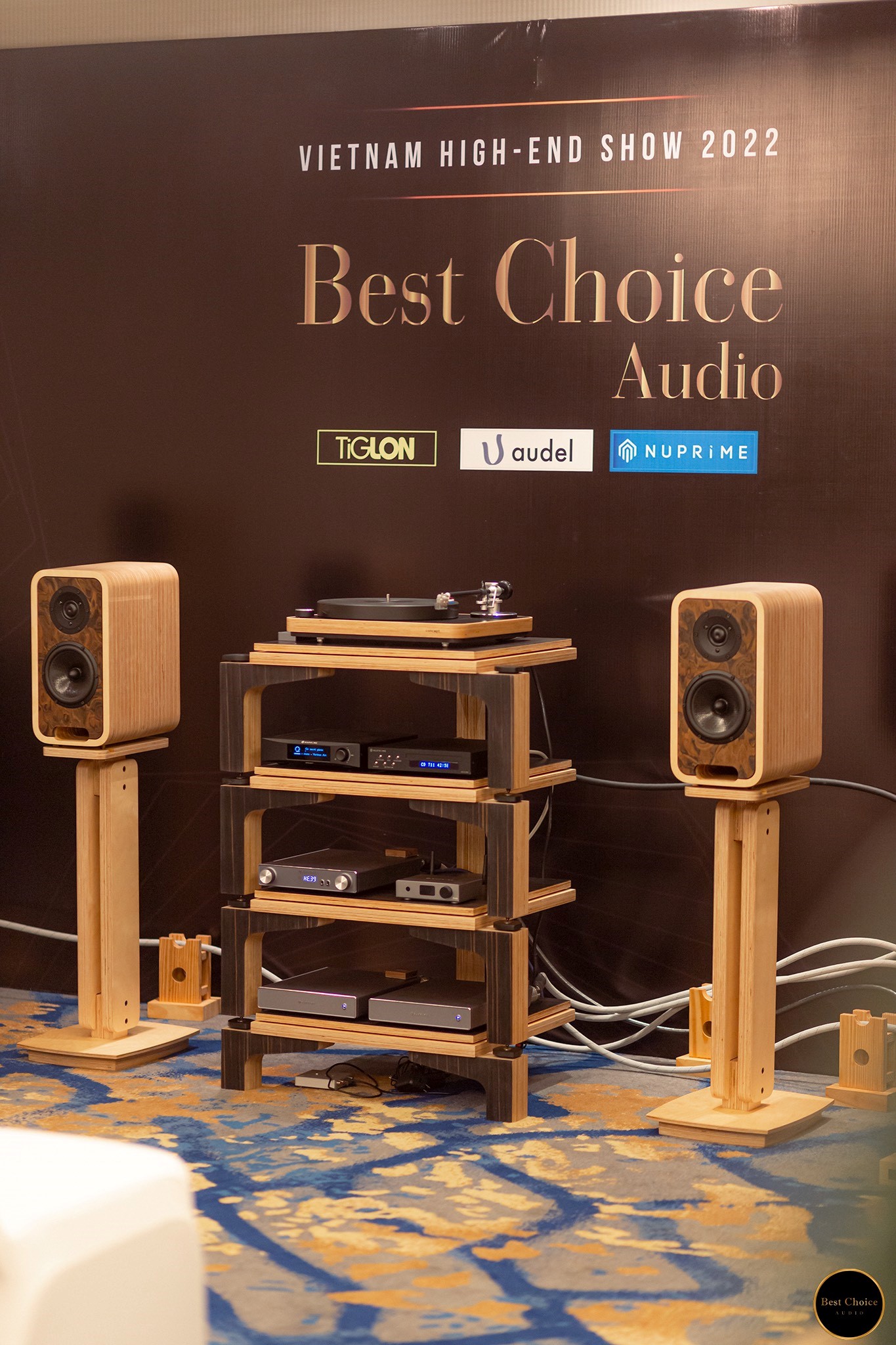 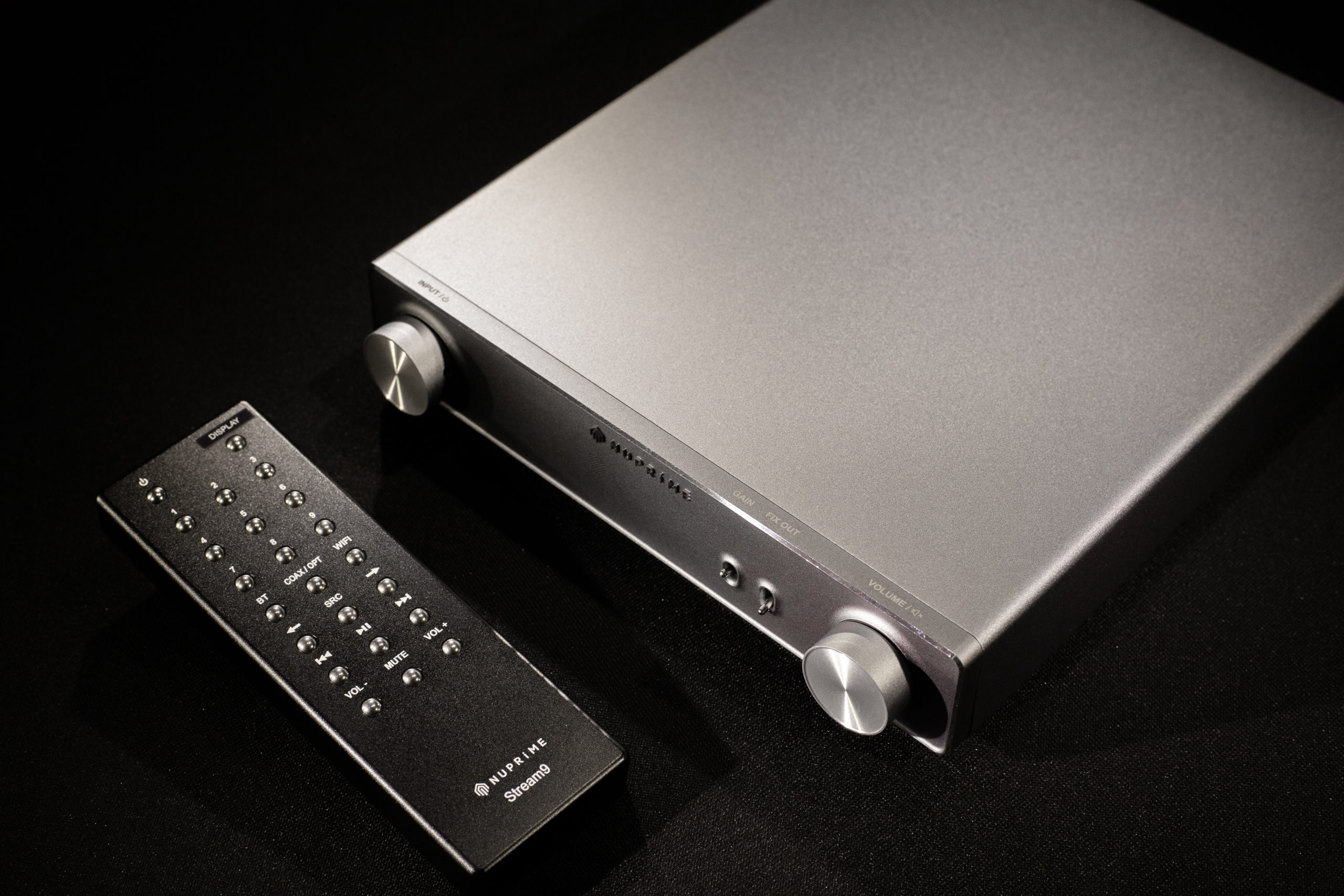 Overall, the PRA’s design is simple, but attractive and effective.
…
Before I dive into listening, it’s time to look at the “Active Low Frequency and Harmonic Gain” control feature. To put it very simply, this knob is somewhat like Ye Olde Loudness switch of yore. When turned on it very noticeably boosts bass, without increasing the overall volume. It is an interesting EQ effect, and definitely achieves NuPrime’s stated goal of giving smaller speakers a bit more natural low end. It worked well with my Wharfedale 225s, and actually sounded fairly nice with my Omen Dirty Weekend on its lowest setting. However, through the Polk L600 (review forthcoming), the knob made the bass a little too flabby, which makes sense. (The L600 have a very deep low end, and compensating made the bass a little too intense.)
…
The backgrounds were shockingly black, and it almost felt as if the AMG PRA preamp was nearly transparent, if you’ll forgive a reviewing cliché. That deep noise floor allowed the music to shine with a crispness and dynamism that I absolutely loved.
…

“But then the sound also immediately became much more forgiving, and the soundscape clearly grew in all three dimensions. Likewise, the bass became more nuanced and detailed while the weight was still present. And that meant I could now start listening to other things in the music. At the same time, listening to STA became a very musical pleasure. And it was here that it became clear that the sound is very similar to PRA. However, STA does not have quite the same slap and dynamics as PRA, but it is also completely unique in that area.

It also meant that I actually stopped thinking more about the sound, and instead just enjoyed the music. As if by magic, there was a presence in the music, and both voices and instruments gained naturalness a la what I know. And the sound just stretched further up towards the high frequencies completely without artifacts or anything else that could interfere with the experience.
…
… I give Nuprime AMG PRA the award “Best Buy” along the way!

-> Read the full review by Mikkel Gige at HiFi4All.dk

This is an exceptionally detailed review of the AMG PRA and you have to read the review in its entirety. Here is just an extract from one section:

With a month of serious listening in a progression of systems, I’ve enjoyed every minute of the PRA. The tag line for Well Tempered Labs is ‘new music from your records’ and this is exactly what the NuPrime does in this setting. Every turntable and phono stage combination reveals previously unheard details that upset our established hierarchy of performance. Crazy as it might sound, when first listening to our entry level turntable with an affordable MM cartridge, I was hearing passages, vocals and instrument lines that I’d not heard before in any context. I was starting to think that there might have been something wrong with our best turntable system. This seemed to be the only rational explanation given the price disparity.

But as we stepped the system up, the qualities of the PRA became more obvious. Once you hear what you have been missing there is no going back.

Transparency is one thing but transmission is another. As we noted at the start transparency is almost a passive quality – you can see through something. And there is no doubt that by conventional standards the AMG PRA is transparent. But it does a lot more than that – it effectively illuminates, expands and magnifies giving a level of clarity I’ve never heard before at this level. 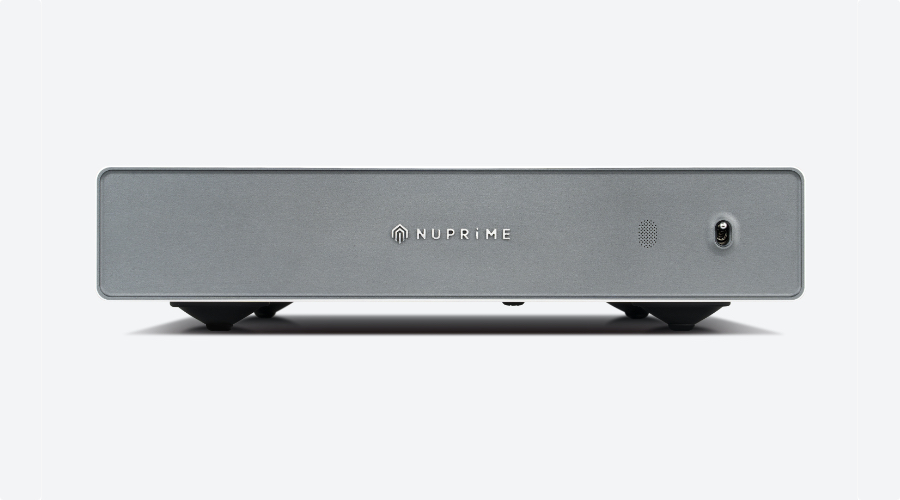